I was having some trouble getting values from my home-brewed web api into a InfoPath Designer 2013 form, so I wanted to document the solution for those of you out there perhaps struggling with this as well.

I was calling a simple 'Hello World'-web api that would return a string. My simple aip looks like this:


However, upon calling this api in InfoPath Designer 2013, I got the following error message: 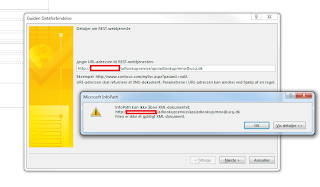 ... to indicate the xml structure is invalid.

I didn't get it - when I called the service directly from my browser, valid xml was returned!: 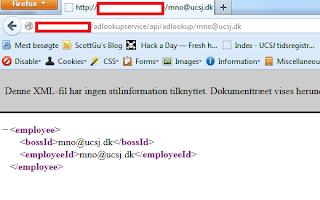 The problem, as it turned out, was of course the one that as opposed to the xml displayed by my browsers, the InfoPath Designer application - correctly - retrieved the data by way of json, the web api's default MO.

So, in order to serve up only XML, for InfoPath to agree with, we'll strip away the web api's possibility of serving up json altogether. Modify your WebApiConfig to resemble the below, though of course take into consideration the routes you have for your own app:

// tbe below must be enabled if this rest service is used with infopath designer 2013 - it only accepts xml data.
// thus we'll remove the json return type
var formatters = GlobalConfiguration.Configuration.Formatters;
formatters.Remove(formatters.JsonFormatter);


Now, as we re-publish the web api service, we can try once more the url in InfoPath, which will now allow us to proceed to the next step: 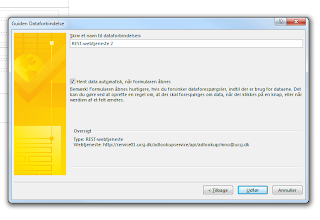 Intriguingly, on a completely different note, the 'get data from http rest service' workflow component in Sharepoint Designer 2013 works off JSON, as opposed to XML! But that's a blog-entry for another rainy day.

Hope this helps someone, anyone,