Would you contemplate using a containerized environment, that you might tear down at any moment, only to build it right back up again, indistinguishable from how it was before?

I have recently begun to do just that. And it has greatly enhanced my workflow, and productivity. And I’ll try and describe the how’s and why’s below.

When we think of Docker, we usually think of reasonably light-weight container instances, that we may assemble and congregate to form various applications. Each container yields usually a particular and highly individual service, for example a REST API or a database instance or a memory-cache or what have you, and we can compile these into low coupled solutions. And there’s the potential of scaling, of the low overhead and cost that comes with only keeping the containers running for the duration of their workload. That’s the norm. But really one of the fundamental aspects of using Docker is in how we can create a image of anything we wish, and the brevity - all things being equal - in how Docker image recipe makes it simple to conjure up the exact same environment to the detailed spec that is the Docker-file. Right now I’m running a number of only slightly different Ubuntu-based development environments in docker containers, that I access remotely. It’s based on an Ubuntu 17.10, it’s got Visual Studio Code installed, a few extensions to that, a browser, git. Postman, that I recommend for API testing.

Why would one wish to do that, 'dockerize' a full-fledged Ubuntu, weighing in at some odd gigabytes? I can think of several promoting arguments:

- The transparency of the environment. Setting up a dev machine can be tedious, and after a while it inevitably becomes cluttered with updates and remains of old installs and such. A Docker-initiated container won’t suffer from this; any changes are made in the Docker-file and we’ll get into the habit of tearing the machine down, and building it anew, soon enough. A Docker-container will never become polluted over time; it doesn’t live long.

- The versioning of Docker-files becomes a major factor. We can have several distinct Docker-files, each suited to their individual project. Some will hold a different set of tools than others. Also, significant, it won’t hold applications that aren’t needed for solving the particular problem you’re working; no e-mail app, no chat app, no office-app if that’s not required. It’s easy to not become distracted when the apps that might distract us aren’t installed.

- Sharing is caring. I can work on the exact same development environment as my colleague, as we’re both tied in to the same dev setup. I’ve so suffered in the past when for some reason I wasn’t able to access the same resources, or install the same apps, as my colleague. Everything is the same; it narrows the focus on the project. And when I need to hand the project over to the developer next to me, I can be sure the environment will work the way I intended.

- I needn’t worry about my machine breaking down. Not that this has happened many times during my career, but there has been the odd irrecoverable crash. With a Docker environment, I just need to get my hand on a machine, any damn machine that will run Docker. Pull the Docker image, spin up the container, get to work.

There are, of course, alternatives. I’ve often used Virtual Machines, that I’ve provisioned and enhanced with scripts, be it apt-get’s on Linux or Choco on Windows. But they’ve never worked for me in the same fashion as does Docker-containers. They too became polluted over time, or it was a hassle to take them on the road with me. Docker containers are easier; the fire-and-forget nature appeals to me. A virtual machine takes up a chunk of space that you’ll only get back when you stop using it; a Docker-container only takes up space for as long as you use it - though we do need to remember to clean up after ourselves.

It’s not all pros, there are some cons, of course there are. If I’m not disciplined enough to commit my development changes to source control, well, let’s just say that a Docker-container doesn’t have a long attention-span! But that really all I can hold against the notion.

The potential in tying in the development environment with project-specific software and -configuration is, I can testify, quite productivity enhancing - and I, for one, won’t be going back to maintaining my own development machine.

Enough talk, let’s try it out. Install the Docker community edition if you don’t have it already. Then take a glance at my template Docker-file, below, for an Ubuntu 17.10 with VS Code and a few related extensions installed, as well as a Firefox Browser, the Postman API development tool and a few other tools of my personal liking. It’s heavily annotated so I’d like to try and let the comments speak for themselves:

If you’re entirely new to Docker, hopefully the comments should make it clearer in what’s going on here. We start out by downloading a Linux distribution, then do a bunch of RUN commands which execute when we progress to build the image. This includes also setting up a user and a super-user. Save the file as ‘Dockerfile’, without extension, and execute, in the directory of this new Docker-recipe, the ...


... command. Then sit back and wait for a bit; the individual steps of the recipe will be executed and the image built. Now’s the time to put it to use. The image installs and runs a NoMachine service, enabling remote desktop connections via a NoMachine-client application. It’s fast and free. So go ahead and install a client from their web-site, https://www.nomachine.com/download, and spin up a Docker container from the Docker image just built, by issuing the following command: 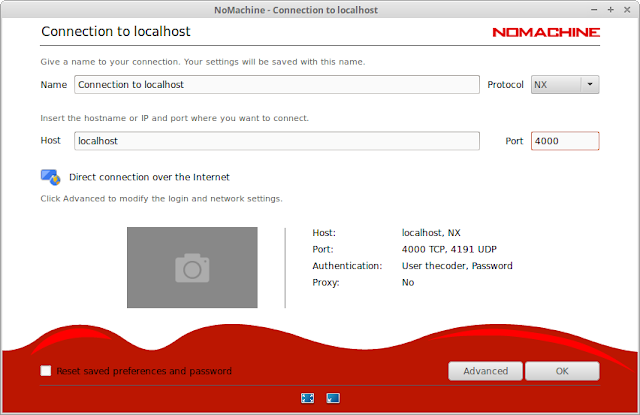 ...Where 'localhost' would of course be the host-name of the machine where the Docker-container is running. Having connected to the container, this should be the first that you see: 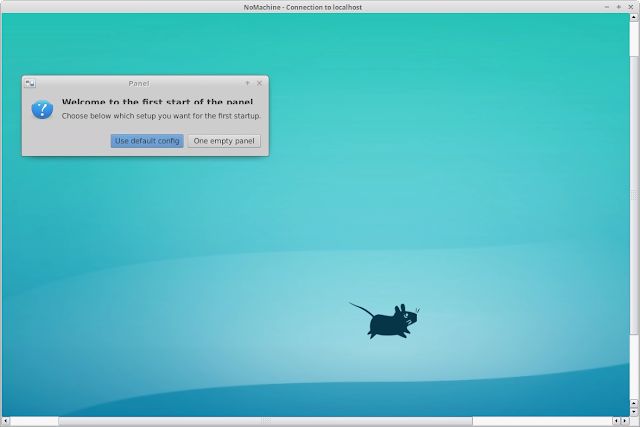 The machine tells us it lacks some basic configuration - that’s because we installed it unattended, so as not to have to deal initially with all those setup-choices. Just press ‘use default config’ and be done with it.

That’s it - you now have a machine with VS Code installed: 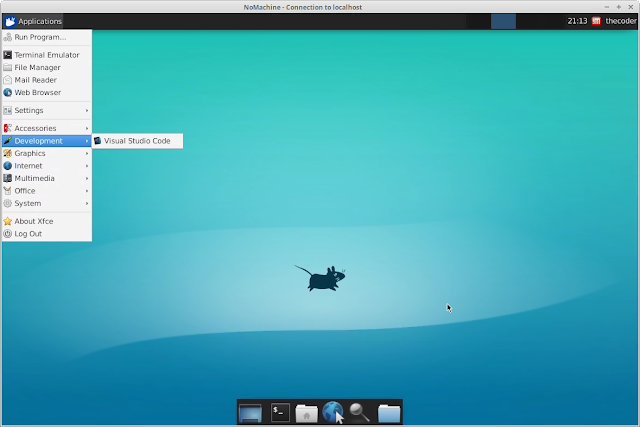 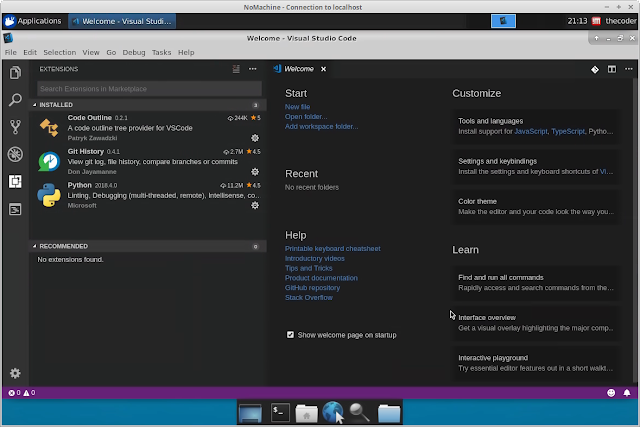 If you’re new to Docker there’re lots of tutorials and documentation available. Highly recommend trying build commands on a ‘hello world’ Dockerfile instead of the slightly more complex one, above. If just to get a feel for the command-line interface and command responses.

The Docker-file above is maintained at my github repository, https://github.com/harleydk/linuxRemoteDocker, which you can clone if you like. There’s a bit of further documentation available there.

I’d much like to hear from you, if you find it useful and/or if I can help out in some way. So drop me a note in the comments or create a new github issue, https://github.com/harleydk/linuxRemoteDocker/issues and I’ll see what I can do.

Thanks for reading & happy developing.