I've just taken delivery of a couple of Arduino Pro Mini's and want to share how to program them, using the Arduino IDE and a FT232RL FTDI USB to TTL serial adapter.

The Arduino Pro Mini has the same feature-set as the Arduino Uno, for example, but is much, much smaller and doesn't consume the power the other Arduino's do, so it may be used in battery-powered projects or stuff where space is limited.

Please refer to the below pictures for how to wire the units up. It's really quite easy, in as much as the pins on the FT232 corresponds exactly to the pins of the Arduino Pro Mini. So I'm simply using 6 female-to-female jumper cables, not even separated: 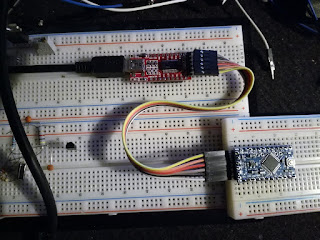 Remember to set the FT232 to 5v if you're programming the 5v version of the Pro Mini, and 3.3v if you have the 3.3v Pro mini. That's really the only thing that's possible to mess up! The 5v/3.3v setting is made by setting this jumper to its correct position (which should be marked on the board):

Note that the Arduino Pro Mini shouldn't be connected to its' own power source - the FT 232 will deliver the power for now. Now, as you connect the units together via the jumper cables, you may be surprised to note how the Arduino starts blinking red, and furthermore there's a strong red LED that's turned on. Don't be alarmed; at least with my version of the Pro Mini, the red LED simply signifies the unit is powered on, and the blinking red stems from the fact that the unit was pre-programmed with the standard 'blink' sketch - in which the on-board LED blinks once every second.

Fire up the Arduino IDE, and in the 'tools->boards' menu select the 'Arduino Pro or Pro mini' variant. Select the right COM-port and hit 'upload' - that's really should be it.