I don't much like it when I must specify hard-coded values into my code. It can be a debugging nightmare, furthermore it looks ghastly. Microsoft's Sql Server OR-mapper linq-to-sql, which I like very much, unfortuantely do not have built-in designer support for generating enums from lookup-tables, which has previously found me doing that hard-coding I do not like to do. Well, no more - look on. 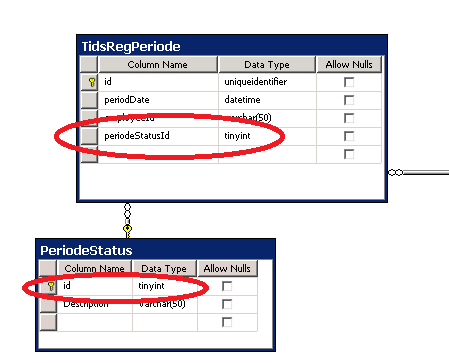 The 'periodStatusId' field is the one that I would ideally want to fill in as ...

It, well, it sucks, to have to pre-define the enumeration. Much preferred would be to do this in the designer, but that's not possible with linq-to-sql. So pre-define it we do, in the know that at least this will be a few hundred percent better than going hard-code style.

Now the enum has been created, we'll refer to this instead of the database's native type in the datacontext. Change both the lookup-table's and the referencing table's field types to your enum, pre-fixed with a 'global::' value, i.e. global::yourNamespace(s).periodStatusEnum. Like so:

That's it - now you can use your enumeration as opposed to actively looking up the value. Like this:


Again, it would be tremendously better if we could specify enums in the designer. But we can't - so this is a heck of a lot better.